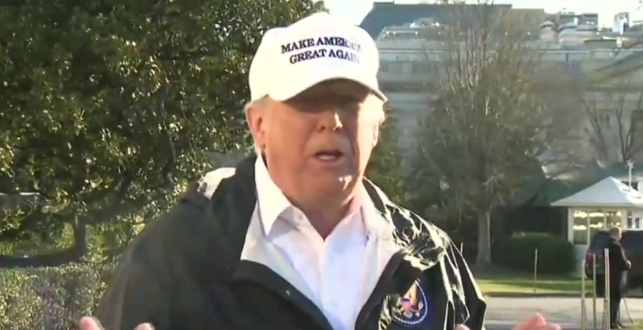 President Donald Trump said on Thursday he was likely to declare a national emergency to secure funds for his long-sought wall along the U.S. southern border if he cannot reach an agreement with Democrats in Congress to provide the money.

Speaking to reporters at the White House as he prepared to depart to visit the Texas border town of McAllen on the 20th day of a partial government shutdown, Trump repeated his contention that he had the right to declare a national emergency over immigration.

Trump just told reporters that he “probably… almost definitely” will declare a national emergency to bypass Congress and get money for the wall if he can’t get a deal with Dems.

How long will he give negotiators before he gives up on them and takes unilateral action?

REPORTER: If this is a national emergency, why haven’t you delcared it?

TRUMP: “Because I would like to do the deal through Congress and because it makes sense to do it through Congress. But the easy route is for me call a national emergency and do it.” pic.twitter.com/Hg9vuYO5Bw

Of the 58 times presidents have declared emergencies since Congress reformed emergency-powers laws in 1976, none involved funding a policy goal after failing to win congressional approval https://t.co/OytOd1F2zb

I asked Trump, who said he is prepared to declare a national emergency, when this emergency/crisis began.
“Oh, it began a long time — ask President Obama,” Trump said.
I then pointed out that he has been President for 2 years.
His response: “Look, look, you can all play cute.”

Trump, via pool: “Have the option” to declare National emergency.

“If this doesn’t work out, I’ll probably will do it, maybe definitely.”

Trump repeated his claim that Mexico is “paying for the wall indirectly many, many times over by the really great trade deal we just made.”

But, any economic gains from the USMCA would go to private individuals and companies, not the U.S. Treasury. https://t.co/xiP5fqBS4e pic.twitter.com/Pl5uGYcgXh

Trump says he will “100 percent” declare a national emergency if Congress doesn’t make a deal with him to fund the border wall pic.twitter.com/2vZpM9rdZZ