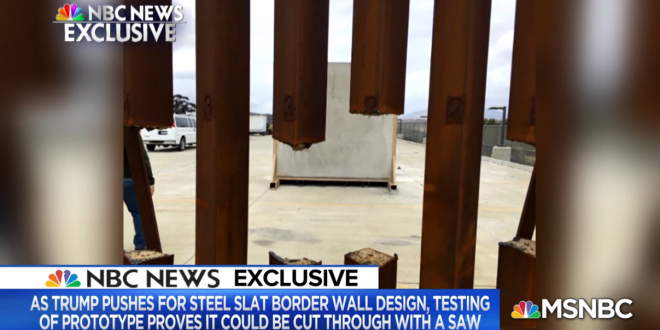 President Donald Trump has repeatedly advocated for a steel slat design for his border wall, which he described as “absolutely critical to border security” in his Oval Office address to the nation Tuesday. But Department of Homeland Security testing of a steel slat prototype proved it could be cut through with a saw, according to a report by DHS.

A photo exclusively obtained by NBC News shows the results of the test after military and Border Patrol personnel were instructed to attempt to destroy the barriers with common tools.

As a candidate, Trump promised to build an “impenetrable, physical, tall, powerful, beautiful” wall on the border that would be paid for by Mexico. Before the Oval Office address, the White House’s Office of Management and Budget sent a letter to Congress requesting $5.7 billion for the construction of 234 miles of steel barrier.

EXCLUSIVE: DHS test of steel prototype for border wall, Trump’s preference, showed it could be sawed through.

Previous Trump: I’m “100% Ready” To Declare Wall Emergency
Next Tony Perkins On Working With Facebook: I Told Them They Have A Problem With Censoring Right Wingers