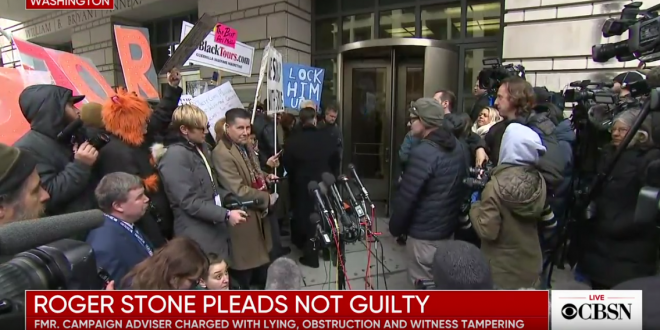 Roger Stone Pleads Not Guilty To All Charges [VIDEO]

President Donald Trump’s longtime political adviser and confidante Roger Stone pleaded not guilty in a federal courthouse in Washington, D.C., Tuesday, where the self-described “dirty trickster” is being arraigned on a seven-count indictment brought by special counsel Robert Mueller.

Stone arrived at court Tuesday morning amid a barrage of cheers from supporters and jeers from protesters, who shouted “lock him up” – a reference to chants of “lock her up” directed at Democratic presidential nominee Hillary Clinton during 2016 Trump campaign rallies.

The video below is live at this writing.

Roger Stone arrives in court to protesters chanting “lock him up” and supporters shouting “Roger Stone did nothing wrong.”

He will be arraigned on a seven-count indictment brought by special counsel Robert Mueller. https://t.co/2W9gqRMKgh pic.twitter.com/jwUPRydo0u

We’re out here at Roger Stones arraignment. A small cohort of pro-Stone protesters arrived. They recognized me. Folks include Jacob Engels, a Stone mentee, and Luke Rohlfing, a Big League Politics writer pic.twitter.com/G9iCVdD2pc

Came to DC to see the Newseum and wound up stumbling into the Roger Stone hearing. A handful of protesters outside and the Trump Rat made an appearance too! pic.twitter.com/XxkCKNT2jq