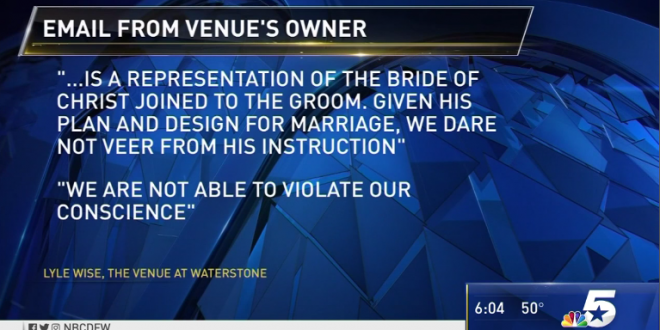 Aaron Lucero and Jeff Cannon wanted a country wedding. They say they still do, even after what they thought was their dream venue turned them away. “It’s still the idea,” Lucero, 29, told McClatchy. “Planning your wedding is supposed to be this joyous, happy moment in your lives, and this was so jarring because it happened literally the first week we started looking for venues in earnest.”

But the Venue at Waterstone, in Celina, Texas, refused to host Lucero and Cannon, according to an email sent to the couple the night before they were to tour the rustic event space about 40 miles north of Dallas. In the email, the venue’s owner Lyle Wise explains that he’s only turning the couple away based on their sexual orientation because of his “love and gratitude” to God.

The email to Cannon, signed by venue owner Lyle Wise, said the venue holds to a definition of marriage that is a “bride of Christ joined to the Groom.” “Given His plan and design for marriage, we dare not veer from His instruction lest we be guilty of altering what He has set forth,” the email read.

Wise said in a statement to KXAS-TV (NBC 5) that he and his family “cannot violate the convictions God has placed within us.” It is legal in Texas to fire, evict or refuse service to someone because of their sexual orientation or gender identity.