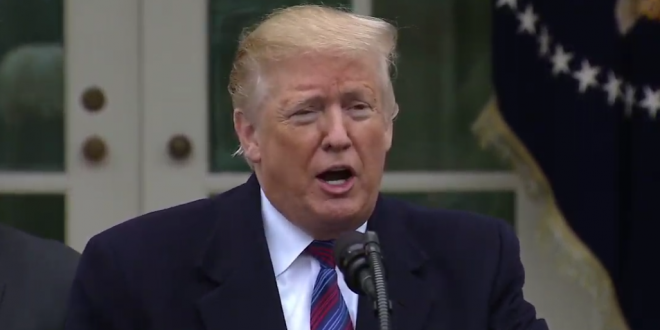 REPORT: Trump Wants To Call The Shutdown A “Strike”

At yesterday’s meeting with Schumer and Pelosi.

President Trump kicked off the meeting with a rant lasting roughly 15 minutes that included his $5.6 billion demand for a border wall, and threatened that he was willing to keep the government closed for “years” if that’s what it took to get his wall.

He also, unprompted, brought up the Democrats who want him impeached, and even blamed Pelosi for new Democratic congresswoman Rashida Tlaib saying at a party earlier this week that Democrats would impeach the “motherfucker” Trump. (It is unclear why Trump would think Pelosi was responsible for this.)

Along with saying the word “fuck” at least three times throughout the meeting, the president bizarrely stated that he did not want to call the partial government shutdown a “shutdown,” according to the source. Instead, he referred to it as a “strike.”

There’s more about the meeting at the link.

Previous CHATTER AWAY: Overnight Open Thread
Next Spokespersons For Former Presidents Respond: Trump Is Lying About Discussing The Border Wall With Them