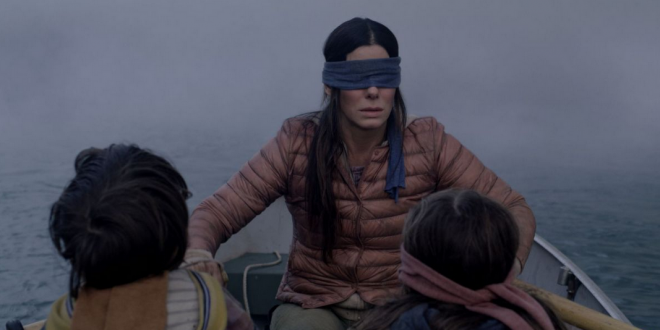 The challenge takes the core concept of Bird Box — wearing a blindfold at all times while wandering around outside — and applies it to a certain period of time. Some people, like YouTube creator Morgan Adams, have tried to go about their daily lives for 24 hours while blindfolded, while others have attempted the challenge for a shorter period.

Netflix’s social media team called out the challenge on Twitter, asking people to not hurt themselves while performing the act.

In Bird Box, Bullock and her children, Boy and Girl, are forced to wear blindfolds and navigate a river and spooky forest to protect themselves against the evil monster that, if seen, causes people to kill themselves.

The movie not only broke viewership records, it inspired a bevy of #BirdBoxChallenge memes, including ones in which folks record themselves blindfolded and attempting to do complete tasks, many of which are depicted in the movie.

Can’t believe I have to say this, but: PLEASE DO NOT HURT YOURSELVES WITH THIS BIRD BOX CHALLENGE. We don’t know how this started, and we appreciate the love, but Boy and Girl have just one wish for 2019 and it is that you not end up in the hospital due to memes.

Previous Sanders: Democrats Are Only Talking Impeachment Because They Know They Can’t Win In 2020 [VIDEO]
Next Pelosi Cautions Against “Divisive” Impeachment Talk