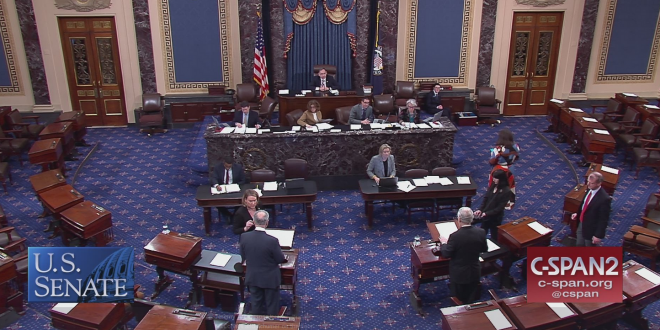 The Senate will vote Thursday on two separate bills that would bring an immediate end to the partial government shutdown: one backed by President Trump that includes $5.7 billion for his border wall and another that would simply extend funding for shuttered agencies through Feb. 8.

The plan, a compromise between Senator Mitch McConnell, the majority leader, and Senator Chuck Schumer, the Democratic leader, offers the first hint of a path out of the partial shutdown, which is now in its fifth week and has left 800,000 federal workers without pay. The two announced it Tuesday afternoon on the Senate floor.

Sens. McConnell and Schumer announce there will be 2 votes Thursday afternoon:

Both need 60 votes to pass. – @frankthorp

there will be *two* procedural votes in the Senate on Thurs – on to move forward in the President’s funding proposal, one to move forward on one of the House Dem-passed bills to re-open the government until Feb. 8 to make way for border negotiations

McConnell and Schumer announces the cloture votes on the floor. Both votes will require 60 votes to advance.
This is the text House-passed bill that will receive a procedural vote (and serve as the vehicle overall): https://t.co/FKWKwVRi1e

Schumer: McConnell’s “attempts to blame Democrats for the shutdown are futile. They’re so far from really that no one takes the Leader seriously … The American people know that Pres. Trump is responsible … They have learned that Leader McConnell is a co-conspirator.” Via ABC pic.twitter.com/ZOjr1b9XjN