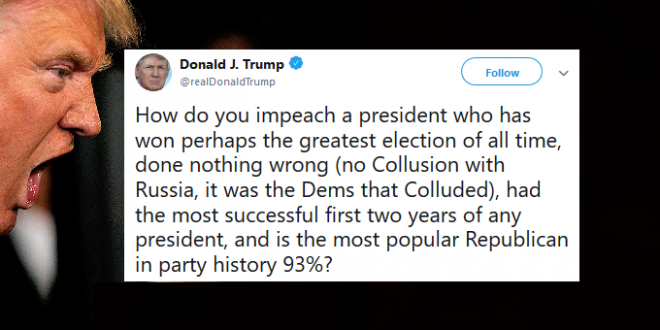 Glorious Leader: I’m Too Fabulous To Be Impeached

A day after Democrats officially took over the House of Representatives – and one lawmaker profanely called for impeachment – President Donald Trump accused his newly empowered opponents of only wanting to remove him from office.

Trump did not identify the inspiration for his impeachment tweet, but it came the morning after a new Democratic member of Congress – Rep. Rashida Tlaib, D-Michigan – told supporters regarding Trump: “We’re going to go in and impeach the motherf***er.”

How do you impeach a president who has won perhaps the greatest election of all time, done nothing wrong (no Collusion with Russia, it was the Dems that Colluded), had the most successful first two years of any president, and is the most popular Republican in party history 93%?

As I have stated many times, if the Democrats take over the House or Senate, there will be disruption to the Financial Markets. We won the Senate, they won the House. Things will settle down. They only want to impeach me because they know they can’t win in 2020, too much success!