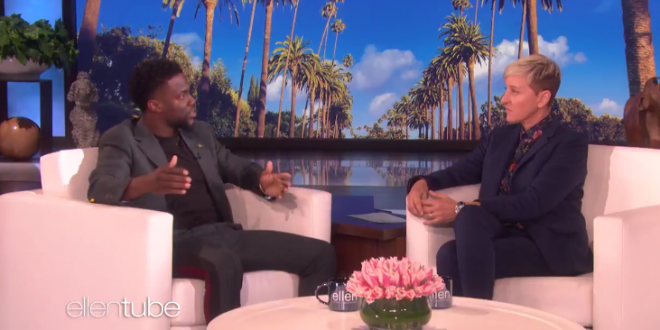 Ellen DeGeneres Faces Backlash After Forgiving Kevin Hart For Homophobic Past: “I’m In His Corner” [VIDEO]

Ellen DeGeneres’ attempts to play peacemaker between The Academy and Kevin Hart has engendered a social media backlash. Hart, who stood down as Oscars host after the resurfacing of past homophobic tweets, taped an interview with DeGeneres on Thursday that was originally due to air on Monday, but the producers of Ellen deemed it newsworthy enough to shift it to Friday with clips released on Thursday night.

DeGeneres went on to defend Hart against what The Upside star felt was a malicious social media campaign to derail his career and urged him to rethink his decision on stepping down as Oscars host. “As a gay person. I am sensitive to all of that. You’ve already expressed that it’s not being educated on the subject, not realizing how dangerous those words are, not realizing how many kids are killed for being gay or beaten up every day,” said DeGeneres.

Hart said he felt under attack and did not want to be the center of attention at the ceremony. After Hart’s apology, DeGeneres revealed she called the Academy.

“I called them, I said ‘Kevin’s on. I have no idea if he wants to come back and host. What are your thoughts?’ And they were like, ‘oh my God, we want him to host. We feel like maybe he was misunderstood or it was handled wrong or we said the wrong thing. But we want him to host.Wwhatever we can do we would be thrilled and he should host the Oscars'”

DeGeneress told Hart he should take the job, to prevent his critics from winning. He said he would think about it.

I feel like if you’re not homophobic anymore, you shouldn’t mind apologizing for your past homophobia again and again and again. I don’t want to hear a hostile retelling of how we didn’t hear your meager apology the first time.

I expected Ellen to actually ask Kevin Hart some sort of challenging question. Anything, really. But instead, it was just one long monologue from Kevin interspersed with Ellen’s approval. That interview made me miss the previous talk show hosts that asked tough questions.

In this conversation, @KevinHart4real was authentic and real, and I’m in his corner. #OscarsNeedHart https://t.co/nhMwSefrMl

I had an incredible and honest conversation with @KevinHart4real about hosting the #Oscars. It was supposed to air on Monday. I don’t want you to have to wait, so now it’s gonna air tomorrow.

Previous Glorious Leader: I’m Too Fabulous To Be Impeached
Next Ocasio-Cortez Floats Up To 70% Tax For Super Wealthy