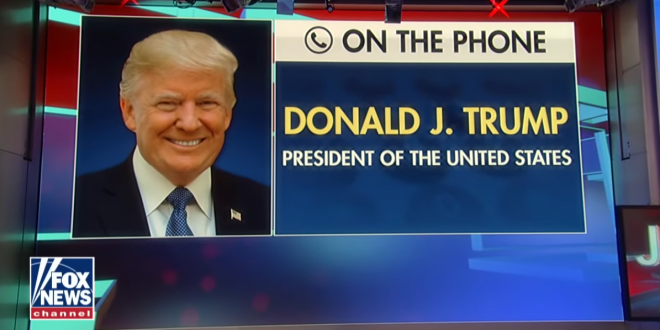 Fox Host Asks Trump If He’s A Russian Agent: “That’s The Most Insulting Thing I’ve Ever Been Asked” [VIDEO]

President Donald Trump slammed The New York Times in a Fox News interview Saturday, calling its report that the FBI investigated him because of fears he may have been secretly working on behalf of the Kremlin as the “most insulting article” ever written about him.

When Jeanine Pirro asked Trump “are you now or have you ever worked for Russia,” Trump didn’t directly answer the question, but said: “I think it’s the most insulting thing I’ve ever been asked.”

Trump lamented the fact that “I haven’t actually left the White House for months,” except for a quick trip to Iraq. He failed to mention trips for golf, campaign rallies, the G20 summit and visits to California fire scenes, among other events. “I’m a worker,” Trump said.

In order for Cohen to get his sentence reduced, he thought, “I have an idea, I’ll give you some information on the president. Well, there is no information,” Trump said during his 20-plus-minute phone interview, in which he often rambled on. “He should give information maybe on his father-in-law, because that’s the one that people want to look at.”

When Pirro asked the name of Cohen’s father-in-law, Trump came up empty-handed. “I don’t know, but you’ll find out, and you’ll look into it because nobody knows what’s going on over there,” he said, an unusual statement by a president regarding a private citizen.

“I haven’t actually left the White House in months,” Trump says. What?

Donald Trump just announced that he hasn’t left the White House in months. We all saw him leave the White House and go to Texas the day before yesterday. This man belongs in a rubber room.