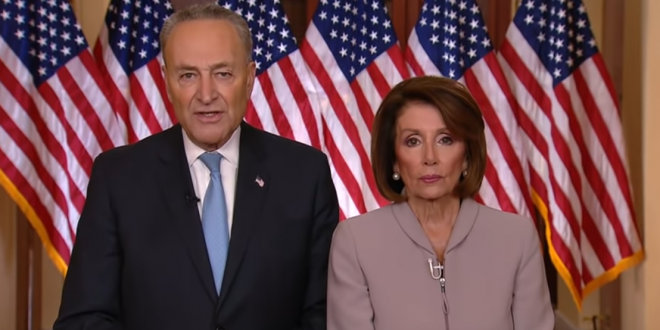 With a 29.3/47 in metered markets results on CNN, ABC, NBC, CBS, Fox News Channel and MSNBC, Pelosi and fellow Democrat and Senate Minority leader Chuck Schumer’s live rebuttal topped Trump’s Oval Office speech on the government shutdown and his demand for a wall on the southern border.

Across the seven nets and down 4 from the opposition, the “temper tantrum” accused POTUS pulled in a 28.1/45 rating in the overnight metrics in the 9 – 9:15 PM ET time period. Perhaps giving a better sense of how America gets its news, the Pelosi and Schumer double act crushed Trump by 26% on CNN and 15% on MSNBC.

Interestingly, the Trump speech from the White House and the Democrats’ response from the Capital building were perfectly matched on FNC, which will not be good news to that frequent viewer at 1600 Pennsylvania Avenue.