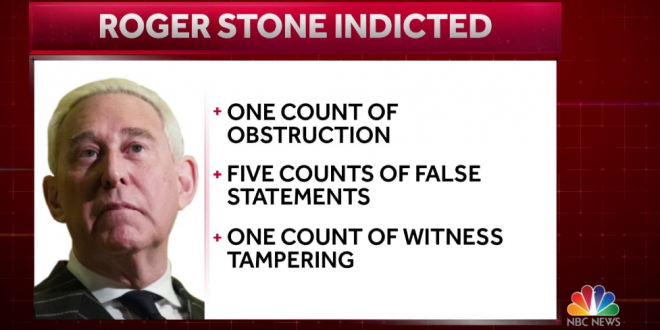 Stone is charged in a seven-count indictment with witness tampering, obstruction and false statements about his interactions related to the release by WikiLeaks of hacked emails during the 2016 presidential election. Some of those false statements were made to the House intelligence committee, according to the indictment.

The indictment lays out in detail Stone’s conversations about stolen Democratic emails posted by WikiLeaks in the weeks before the Republican beat Democratic opponent Hillary Clinton. Mueller’s office has said those emails, belonging to Clinton campaign chairman John Podesta, were hacked by Russian intelligence officers.

CNN Exclusive Video: Longtime Donald Trump associate Roger Stone has been indicted by a grand jury on charges brought by special counsel Robert Mueller. He was arrested by the FBI Friday morning at his home in Florida, his lawyer tells CNN. https://t.co/Y715h2VvAD pic.twitter.com/l4m5Q0YQqr

Remember that the FBI agents who arrested Roger Stone aren’t being paid, but still are doing their job protecting this country