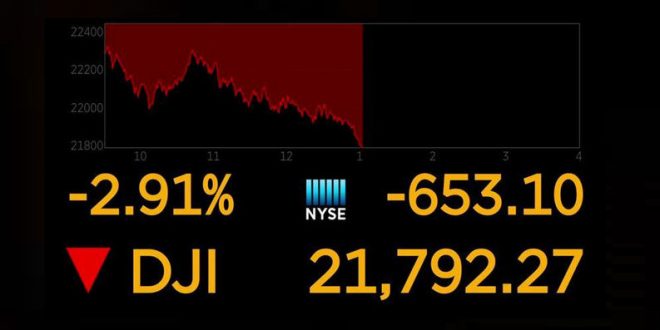 Markets took a wild ride on Monday after Treasury Secretary Steven Mnuchin’s attempts to calm investors backfired. Stocks had recovered late morning, but then fell to their lowest level for the day after President Donald Trump tweeted mid-morning, “The only problem our economy has is the Fed.”

Investors are concerned that Trump may fire Federal Reserve Chairman Jerome Powell. The major bank CEOs who spoke by phone Sunday with Mnuchin were “totally baffled” by the session, according to a person familiar with the call, who said the executives found the encounter puzzling and largely unnecessary.

The only problem our economy has is the Fed. They don’t have a feel for the Market, they don’t understand necessary Trade Wars or Strong Dollars or even Democrat Shutdowns over Borders. The Fed is like a powerful golfer who can’t score because he has no touch – he can’t putt!

Stocks extend fall as the U.S. government shutdown threatens to spill into next year, compounding what is already t… https://t.co/YhYd1vEsJp

We’re watching the Dow Jones decline as the market continues its worst week in a decade. https://t.co/Brpl0YtI0f https://t.co/SrSAFMNLvs

Previous Biden +6 Over Trump In Hypothetical 2020 Matchup
Next Trump Wails: Poor Me, All Alone On Christmas Eve