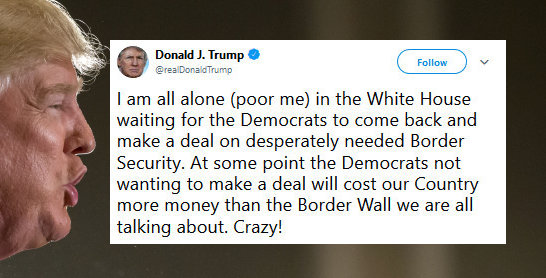 Trump Wails: Poor Me, All Alone On Christmas Eve

President Trump, instead of channeling his inner Kevin McAllister and enjoying being “all alone” in the White House on Christmas Eve, is blasting Democrats for refusing to give him the one gift he really wants: a $5-billion border wall.

The president also skewered the Federal Reserve, saying it “doesn’t understand” his policies — leading to the recent market downturn. The Dow Jones and S&P 500 both recorded their worst Christmas Eve trading day ever on Monday.

I am all alone (poor me) in the White House waiting for the Democrats to come back and make a deal on desperately needed Border Security. At some point the Democrats not wanting to make a deal will cost our Country more money than the Border Wall we are all talking about. Crazy!

The only problem our economy has is the Fed. They don’t have a feel for the Market, they don’t understand necessary Trade Wars or Strong Dollars or even Democrat Shutdowns over Borders. The Fed is like a powerful golfer who can’t score because he has no touch – he can’t putt!

The Wall is different than the 25 Billion Dollars in Border Security. The complete Wall will be built with the Shutdown money plus funds already in hand. The reporting has been inaccurate on the point. The problem is, without the Wall, much of the rest of Dollars are wasted!

Saudi Arabia has now agreed to spend the necessary money needed to help rebuild Syria, instead of the United States. See? Isn’t it nice when immensely wealthy countries help rebuild their neighbors rather than a Great Country, the U.S., that is 5000 miles away. Thanks to Saudi A!