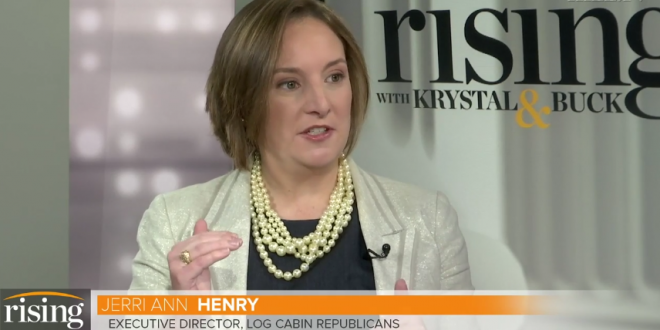 “I want to make sure that we have the opportunity to improve on those things, not just fight over them. Some of the issues where we can make major improvements are just the nuances.

“You know, marriage has only been legal for a short time, and we’ve seen a few hiccups here and there how that’s been rolled out with the military, with the State Department, visas, and how they handle married LGBT partners and non-married LGBT partners for diplomats. That’s something we need a lot of work on.” – Log Cabin Republicans executive director Jerri Ann Henry, speaking this morning on The Rising.

Henry is the former director of Young Conservatives for the Freedom to Marry. She also spearheaded the failed campaign to remove anti-LGBT language from the 2016 Republican platform. Last month she succeeded longtime Log Cabin head Gregory T. Angelo, who announced his stepping down shortly before the midterm elections.