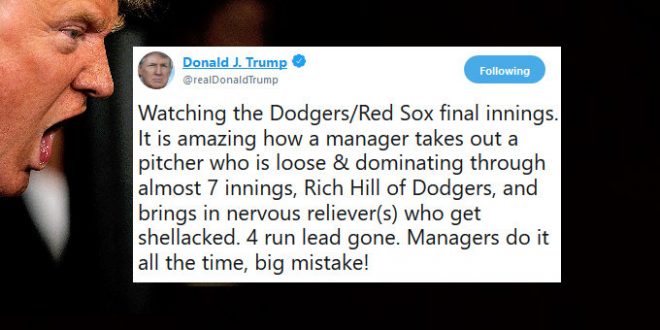 President Trump late Saturday night fired off a tweet commenting on World Series Game 4, saying it was a “big mistake” for the Los Angeles Dodgers to pull pitcher Rich Hill. The Boston Red Sox went on to win the game, 9-6, and now lead the series, three games to one.

Social media users criticized the timing of Trump’s tweet, which came hours after at least 11 people were killed in a shooting at a Pittsburgh synagogue. Trump condemned the shooting earlier Saturday as an “assault on humanity” and an “evil anti-Semitic attack.” He also suggested that an “armed guard” at the synagogue could have prevented the attack.

Watching the Dodgers/Red Sox final innings. It is amazing how a manager takes out a pitcher who is loose & dominating through almost 7 innings, Rich Hill of Dodgers, and brings in nervous reliever(s) who get shellacked. 4 run lead gone. Managers do it all the time, big mistake!

Is tonight when @realDonaldTrump became our President?

–Or was it when he said “there are some very fine people on both sides” at the white nationalist mob event in Charlottesville?
–Or when he tweeted CNN getting body slammed?
–Or when he sabotaged healthcare? https://t.co/YCcnBk1N97

There was a shooting at a synagogue today. 11 people were killed. Earlier this week, there was mass assassination attempt by a proud MAGA supporter. Also, a man shot and killed two black people in Kentucky and said, “whites don’t shoot whites.” What is wrong with you? https://t.co/kOJOMNiBWj

I think you meant to say:
I am having a real difficult time sleeping tonight. The horrible events of today are weighing heavily on my mind. I can’t help but to take some of the blame for this terrible politically charged time we are in. I’m sorry and I will do better.

The president took to Twitter to criticize Dodgers manager Dave Roberts hours after 11 people were shot and killed in a Pittsburgh synagogue.https://t.co/WJVAjSTfuj