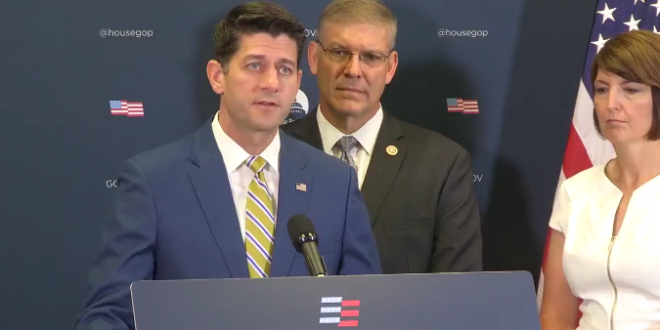 Trump Attacks “Know Nothing” Paul Ryan On Birthright Citizenship: He Should Focus On Holding The Majority

President Donald Trump lashed out at Paul Ryan on Wednesday, saying the house speaker “knows nothing” about birthright citizenship. Ryan previously went against Trump’s proposed plan to sign an executive order eliminating the right to citizenship for children born in the United States.

In an interview with radio station WVLK on Tuesday, Ryan responded to Trump’s plan to end birthright citizenship, saying he “obviously cannot do that.”

“Well, you obviously cannot do that,” Ryan said. “You cannot end birthright citizenship with an executive order. We didn’t like it when Obama tried changing immigration laws via executive action, and obviously as conservatives, we believe in the Constitution.”

Paul Ryan should be focusing on holding the Majority rather than giving his opinions on Birthright Citizenship, something he knows nothing about! Our new Republican Majority will work on this, Closing the Immigration Loopholes and Securing our Border!

Feel like there’s a greater than 50% chance that when you ask Paul Ryan about the Trump tweet, he’ll say he hasn’t had time to read the tweet.

Ryan versus trump, in the waning days of the speakership.

Ending just where it all began. https://t.co/cALW9wpuGb

Previous Tanzania Governor Launches “Hunt” For LGBT People: “Give Me Their Names And My Team Will Get Them”
Next Laura Ingraham Condemns Multi-Language Ballots