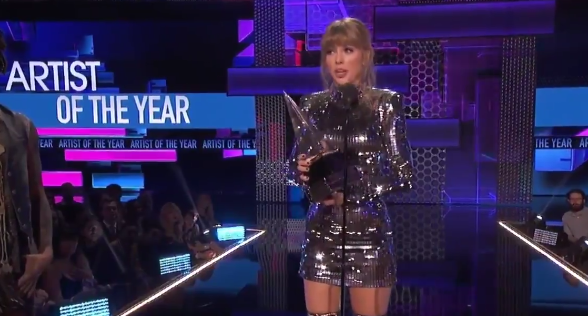 Taylor Swift made history last night at the American Music Awards, earning the most AMA wins ever by a female artist — but she also did something she has never done before: talk about politics during an awards acceptance speech. When Swift won for Artist of the Year during the ceremony she took the opportunity to use her time to encourage the audience and her fans to get politically motivated.

“Every single time this happens it represents encouragement and motivation for me to be better, work harder, and try and make you guys proud,” said Swift in her acceptance speech. “[I want to] mention the fact that this award, and every single award given out tonight, were voted on by the people. And you know what else is voted on by the people? The midterm elections on November 6 — get out and vote. I love you guys.”

#AMAs: @taylorswift13 doubles down, tells fans to “get out and vote” pic.twitter.com/IbLd3To59t