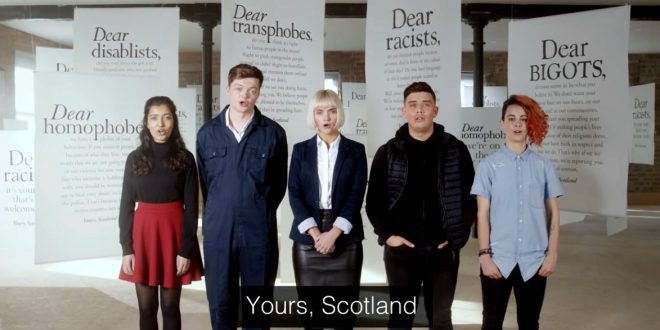 A anti hate-crime campaign endorsed by Scottish ministers and the police risks “stirring up” religious prejudice, according to a leading Christian charity. Billboard posters that have appeared across Scotland in recent weeks targeting prejudices such as racism and homophobia are part of the One Scotland campaign, run by the Scottish government and Police Scotland.

However, the initiative has been criticised by the Barnabas Fund, an aid agency based in Coventry that supports Christians abroad suffering because of their faith. It described the posters as a form of “state-sponsored hatred” that unfairly targets believers. Last year, there were more than 5,300 charges of hate crime reported to in Scotland. About 640 were related to religious discrimination.

The One Scotland campaign asks residents to report hate crimes to the Scottish Police. It features several posters addressed to “bigots, disablists, homophobes, racists, and transphobes.” The former begins with “Dear Bigots,” and reads in full:

“Division seems to be what you believe in. We don’t want your religious hate on our buses, on our streets and in our communities. We don’t want want you spreading your intolerance. Or making people’s lives a misery because of their religious dress. You may not have faith in respect and love, but we do. That’s why if we see or hear your hate, we’re reporting you. End of sermon.”

A formal complaint has been filed.