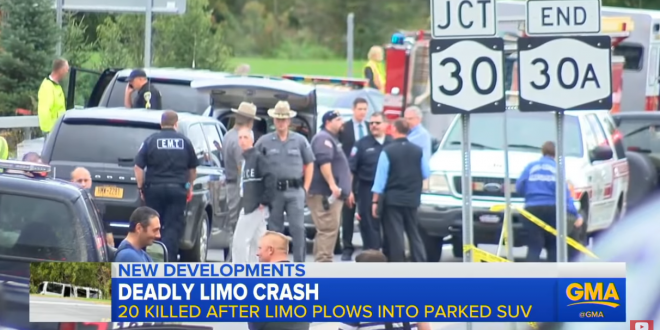 Gov. Andrew Cuomo said the limousine involved in Saturday’s deadly crash in Schoharie failed an inspection last month. Cuomo, talking to reporters Monday at New York’s Columbus Day Parade, also said the driver did not have the proper license to operate the vehicle.

The limousine failed a state inspection last month and was not supposed to be on the road, the governor said. The driver was among the dead.

Robert Sumwalt, chairman of the National Transportation Safety Board, told reporters Sunday that the Schoharie crash was the nation’s worst transportation accident since the Feb. 12, 2009, crash of Colgan Air Flight 3407 in Buffalo, which killed 50 people.

One of the victims of the upstate New York limousine crash that killed all 18 aboard had texted concerns about the “terrible condition” of the limo less than 20 minutes before tragedy struck, her aunt says.

The limo was bound for a birthday party at a Cooperstown brewery on Saturday when it crashed on a winding road in rural Schoharie, about 160 miles north of New York City. Two pedestrians also were killed.

The site of a devastating accident that killed two pedestrians and 18 occupants of a limousine headed to a birthday party, including four sisters, is a known danger spot that has long worried locals, according to a manager of the store that sits at the intersection where the accident happened.

The intersection had been redone in 2008 because of a fatal accident there, said Jessica Kirby, managing director of the Apple Barrel Country Store and Cafe, which is an institution in Schoharie and among the legions of leaf-peepers who take to the roads of upstate New York each autumn.

Since the reconstruction, three tractor-trailers have run through the same stop sign authorities said the limo blew and into a field behind her business, she said.