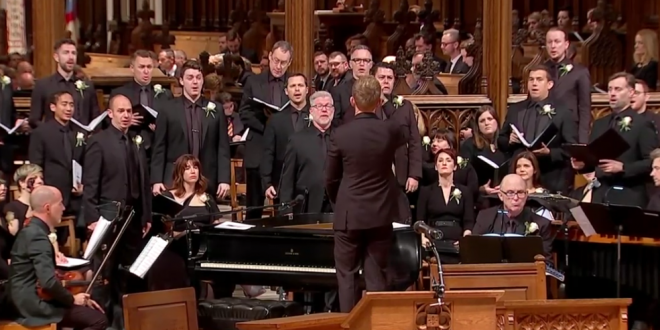 The ashes of Matthew Shepard were interred at the National Cathedral in Washington Friday, giving him a “home that is safe” 20 years after his brutal murder, his father said.

“To the National Cathedral, I cannot thank you enough … for leading the way and showing acceptance and inclusiveness for any and all who enter these grounds,” Shepard’s father, Dennis Shepard, said at a remembrance ceremony at the cathedral ahead of the internment.

“We as a family are very honored and indebted to you for coming for showing your concern for wanting to honor Matt, his memory, his legacy, his belief that we are all equal,” Dennis Shepard told those who attended the remembrance ceremony.

Presiding over the worship service at the second-largest cathedral in the country, in front of a crowd of about 2,025 people, was Bishop Gene Robinson, whose elevation in the early 2000s as the first openly gay bishop in the Episcopal Church marked another huge — and controversial — milestone in the push for LGBT equality.

In his homily, Robinson shared an anecdote from the first police officer who arrived at the site of Shepard’s attack, a remote fence to which his battered body was lashed and had spent the cold night. When the officer arrived, he said, a deer was laying beside Shepard’s body. Upon her arrival, the animal looked straight into the officer’s eyes and ran away.

“Let me just say I’ve been crying for a week now, so I’m pretty apt to cry during this sermon,” Rev Robinson said in his opening remarks. “Matt was luckier than most young gay men in 1998,” he continued. “He had parents and a brother who loved him. He loved his church, the Episcopal church and they loved him back. And I have no doubt that Matt is in Heaven.”