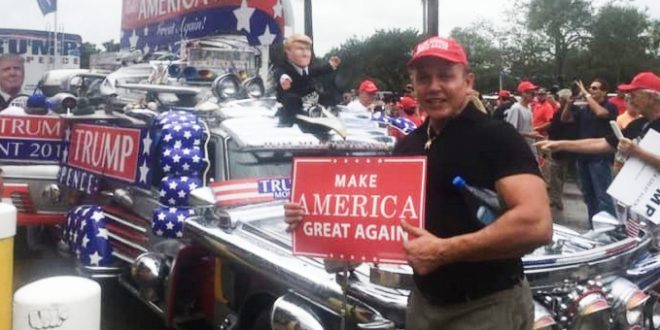 In 2002, he was charged with making a bomb threat in Dade County, Florida. He was sentenced to one year of probation. Prosecutors agreed to withhold adjudication of the felony charge, meaning it was dismissed after he completed the probation in 2003. In 1991, Sayoc was charged with third-degree grand theft, a felony. He pleaded guilty that same year and was sentenced to two years of probation. In 1994, his mother sought a domestic violence injunction against Sayoc, court records show.

Sayoc was arrested on drug charges in 2004. He was accused of possession and sale of steroids, along with possession of a controlled substance without a prescription, tampering with evidence, filing fraudulent tax returns, criminal use of personal ID info and possession or unlawful issue of a driver’s license. He pleaded guilty that same year and was sentenced to 18 months of probation.

In 2013, Sayoc was charged with battery and third-degree grand theft, a felony. He pleaded guilty in 2014 and was sentenced to probation. In 2009, Sayoc was charged with operating without a valid license, not having insurance and not having a tag light and was fined after pleading guilty to the misdemeanor charges. In 2014, Sayoc was arrested on a petit theft charge and violation of probation. He was sentenced to 30 days in jail.

Photos on a Facebook account that appeared to belong to Sayoc, showed him at pro-Trump events in 2016, wearing a MAGA hat, holding MAGA signs, and posting MAGA memes on his social media. Many of his posts were related to his support for Trump.

In one post in September 2016, he celebrated false conspiracy theories about Hillary Clinton’s reported decline in health, saying she was “headed to graveyard” and that “America will celebrate” her death.

Other prominent liberal activists—including Parkland survivor David Hogg and former NFL quarterback Colin Kaepernick—are targeted in his tweets. “Antifa your next [sic],” the account threatened anti-fascist protesters in one particularly violent tweet that included images of what appears to be dead people killed by a python.

Additionally, the account has tweeted violent threats and pictures of death at Sarah Jeong, a New York Times opinion columnist who became the subject of a right-wing troll mob this summer over her old tweets being perceived as “anti-white.”