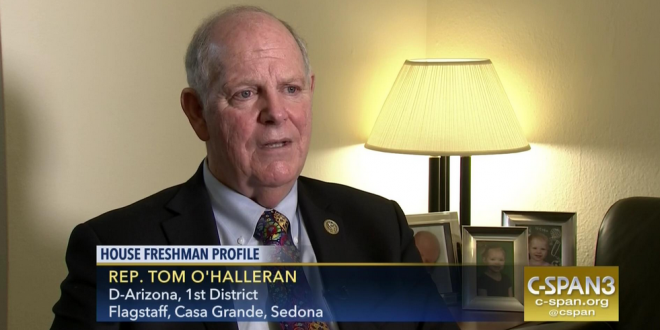 Two young Arizona Republicans tried to make a donation to a congressman while posing as members of a university communist party, in an apparent attempt to tie the Democrat to the far left.

On Friday afternoon in Flagstaff, two men who called themselves Jose Rosales and Ahmahd Sadia walked into the campaign office of first-term Democrat Tom O’Halleran, with $39.68 and an urgent desire for the “Northern Arizona University Communist party” to be given a receipt for the donation.

Lindsay Coleman, finance director for the campaign, drove to the local Republican field office in order to return the money. Almost immediately, the man who identified himself as Rosales appeared and was identified as “Oscar”. He accepted the money from Coleman.

The Arizona Republican party has cut ties with the two men who posed as communists to try to make a damaging contribution to Rep. Tom O’Halleran (D-AZ) just before the midterm election.

An Arizona GOP spokesperson told TPM that one of the men was an employee and has been “terminated.” The other was a volunteer and is “no longer affiliated” with the organization, according to the spokesperson.

“I am here because two young gentlemen made this contribution to our campaign,” Coleman said as she arrived at the front desk. At this point the man who allegedly called himself Rosales comes out from behind a door, with another man behind the desk informing Coleman that his real name is Oscar.

Coleman, who appears to recognize Oscar, then described how Oscar “gave the donation under the name of Jose, which I might also add it illegal to falsify contribution information.” Coleman adds she will “probably report this to the police.”

Fired because they got caught. Watch the money get returned below. O’Halleran, by the way, won his seat in 2016 by defeating homocon Sheriff Paul Babeu.