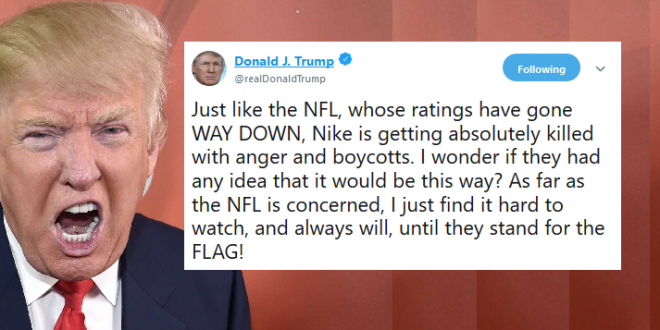 President Donald Trump has once again weighed in on Nike’s polarizing new ad featuring Colin Kaepernick. It’s true that Nike has been the target of anger from certain customers, with many on social media supporting a boycott and burning their Nike apparel in protest. Whether that anger is outweighed by the positive reaction for others will remain to be seen, but most business and brand observers say that Nike likely weighed the risks of a polarizing ad like this before releasing it. They decided to release it anyway, which makes sense when you look at Nike’s core demographic of young, diverse urbanites.

On Tuesday, shares of Nike shed 3.2%, leading declining components on a down day for the Dow industrials, suffering the sports-apparel company’s worst daily drop since April 2, according to FactSet data.  Shares of the retailing giant – a retail tenant of the president’s real-estate business – were attempting to rebound in early Wednesday action, posting a gain of 0.7%. Thus far this year, Nike shares have climbed 28%. The company’s gains outstrip respectable year-to-date returns for the broader market.

Just like the NFL, whose ratings have gone WAY DOWN, Nike is getting absolutely killed with anger and boycotts. I wonder if they had any idea that it would be this way? As far as the NFL is concerned, I just find it hard to watch, and always will, until they stand for the FLAG!

Previous LIVE VIDEO: Social Media Heads Testify Before House
Next Kavanaugh Dodges On Whether A Sitting President Can Be Subpoenaed: That’s A Hypothetical Issue [VIDEO]