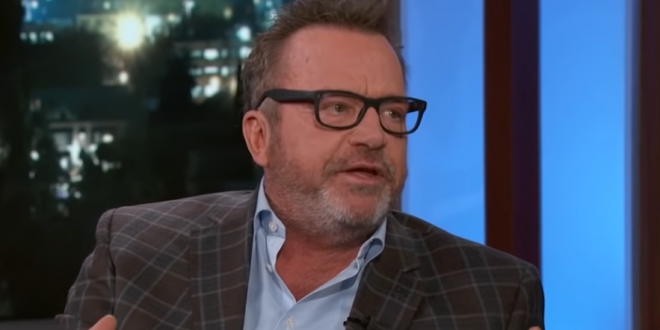 Tom Arnold Scuffles With Producer Of The Apprentice

The tension between Tom Arnold and Mark Burnett boiled over into a physical altercation at Sunday’s Evening Before Emmy party, a fundraiser for the Motion Picture Television Fund. Details of the incident are still unclear. According to a source with knowledge of the situation, Burnett and Arnold arrived at the event held at the Lawn at Century Park at around 9:30 p.m. As both men were walking into the event, a scuffle ensued. A source with knowledge of the situation said it involved shoving but it was unclear who made the first move. Arnold claimed Burnett tried to choke him.

Burnett’s wife, Roma Downey says Arnold “tried to ambush” her and Mark. She says Arnold hurt her and she posted a pic of a bruise on her hand, claiming Arnold was the culprit. Arnold has been working on a show for Vice, a show about so-called “hidden Trump tapes.” One of the things Arnold is after is the outtakes from “The Apprentice,” which Burnett created and produces. Arnold believes the tapes reveal Trump using the n-word and other epithets. Burnett has said he has no access to the tapes because they’re owned by MGM.

Mark Burnett just went apeshit & choked me at this huge Emmy party then he ran away with his torn Pink shirt & missing gold chain. I’m waiting for LAPD

Got this bruise tonight when Tom Arnold tried to ambush my husband Mark and me at a charity event. Is your TV show worth it Tom?Please stop pic.twitter.com/lXvuKjIMI2

Bullshit. You lie your crazy husband attacked me you psycho. I’m filing police report & suing you for defamation. https://t.co/9yXAEXM6na

Mark Burnett doesn’t seem too thrilled about my new tv show. #TheHuntForTheTrumpTapes Starts Tuesday 10:30p @VICELAND & we do a Mark Burnett/Apprentice episode the first night. Yes Roma, saving my country is worth it. Brutal bruise. Should’ve gone to a dr last wk when you hurt it

If you’re going to post a days-old bruise in an attempt to cover for your Trump-enabling husband, Mark Burnett, Twitter is going to call bullsh**… https://t.co/YUBm3AaVU1

Just spoke with Tom Arnold’s lawyer. He confirmed the altercation (he calls it an “unprovoked attack” by Burnett) and says Tom “has a witness” that will back him up. https://t.co/ILO2lTixxB