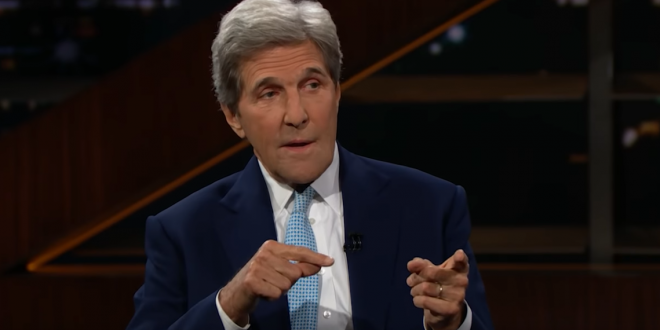 Former Secretary of State John Kerry delivered a blistering assessment of President Donald Trump’s character on Friday’s broadcast of Real Time with Bill Maher. “He is the first president that I know of who spends more time reading his Twitter ‘likes’ than his briefing books or the constitution of the United States,” Kerry told Maher.

“Unfortunately, we have a president, literally, for whom the truth, the whole truth and nothing but the truth is three different things, and you don’t even know what they are,” said Kerry. “He’s got the maturity of an eight-year-old boy with the insecurity of a teenage girl. That’s just who he is.”

John Kerry had illegal meetings with the very hostile Iranian Regime, which can only serve to undercut our great work to the detriment of the American people. He told them to wait out the Trump Administration! Was he registered under the Foreign Agents Registration Act? BAD!

Mr. President, you should be more worried about Paul Manafort meeting with Robert Mueller than me meeting with Iran’s FM. But if you want to learn something about the nuclear agreement that made the world safer, buy my new book, Every Day Is Extra: https://t.co/DKjc33Kvvu https://t.co/cesltkt0zW

PS – I recorded the audio version, not Omarosa.