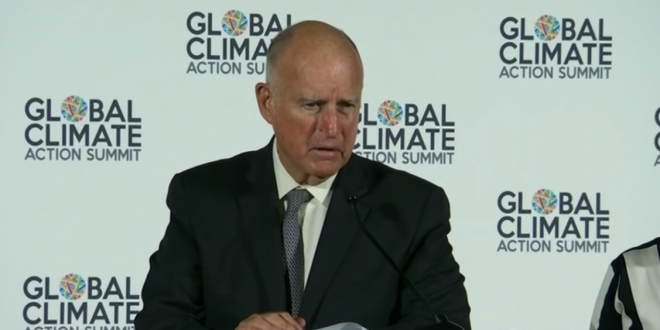 California To Launch Its Own Climate Satellite [VIDEO]

California plans to launch a satellite to monitor pollution in the state and contribute to climate science, Governor Jerry Brown announced today. The state is partnering with satellite imagery purveyor Planet to create a custom craft to “pinpoint – and stop – destructive emissions with unprecedented precision, on a scale that’s never been done before.”

Governor Brown made the announcement in the closing remarks of the Global Climate Action Summit in San Francisco, echoing a pledge made two years ago to scientists at the American Geophysical Union’s 2016 meeting. “With science still under attack and the climate threat growing, we’re launching our own damn satellite,” Brown said today.

During the conference, Mr. Brown, a Democrat, harshly criticized the president and his policies, calling him earlier this week a “liar, criminal, fool—pick your choice.”

Academics and celebrities including Alec Baldwin and Jane Goodall spoke at the summit, or participated in events surrounding it, along with former Vice President Al Gore, New York City Mayor Bill de Blasio, both Democrats, and the chief executives of Starbucks Corp. and McDonald’s Corp. “We will act when nations fail, including our own,” Mr. de Blasio said.

While Mr. de Blasio and many others praised Mr. Brown’s leadership on the climate issue, the summit was dogged by activists who criticized the governor for not doing more to reduce oil production in the Golden State.

Previous John Kerry: Trump’s Like An Insecure Teenage Girl
Next REPORT: Def Sec. Mattis May Be Out After Midterms