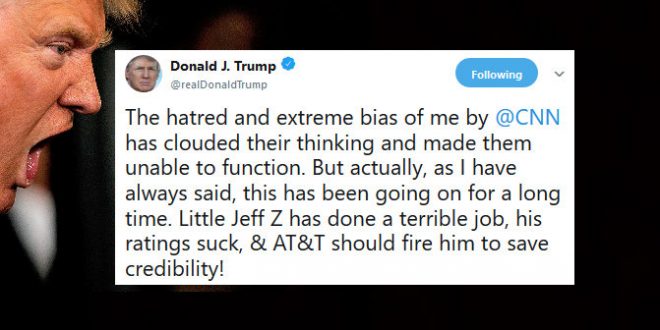 Glorious Leader is watching the evil fake news as usual:

President Donald Trump has started his day on social media by attacking two cable news outlets known for their consistent critical coverage of the White House.

Trump tweets talking trash on negative coverage has become standard operating procedure under this administration, but tweets discussing (even suggesting!) the firing of presidents of CNN and MSNBC is a new bar that Trump had to surpass.

Trump opened with another attack on cable news outlet CNN, but his latest salvo takes a personal attack at CNN President Jeff Zucker. Seemingly upset with what he sees as the “hatred and extreme bias” shown by CNN’s coverage, President Trump suggested that parent company AT&T (which recently acquired Time Warner) fire Zucker to save “credibility.”

The hatred and extreme bias of me by @CNN has clouded their thinking and made them unable to function. But actually, as I have always said, this has been going on for a long time. Little Jeff Z has done a terrible job, his ratings suck, & AT&T should fire him to save credibility!

What’s going on at @CNN is happening, to different degrees, at other networks – with @NBCNews being the worst. The good news is that Andy Lack(y) is about to be fired(?) for incompetence, and much worse. When Lester Holt got caught fudging my tape on Russia, they were hurt badly!

I just cannot state strongly enough how totally dishonest much of the Media is. Truth doesn’t matter to them, they only have their hatred & agenda. This includes fake books, which come out about me all the time, always anonymous sources, and are pure fiction. Enemy of the People!