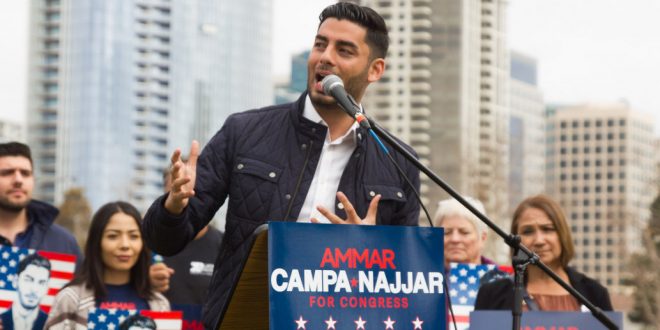 GOP Rep. Duncan Hunter’s indictment is likely to shake up the race for his southern California seat, even though his district is traditionally Republican. Hunter was indicted Tuesday for misusing campaign funds, which has some Democrats optimistic the seat his seat is in play.

Sam Mahood, a spokesman for California’s Secretary of State, told Roll Call, “At this point there does not exist a process in elections code for him to have his name removed from the ballot.”

The only way for a candidate’s name to be removed is if he or she dies before the list of candidates is certified, which will occur in just over a week according to Mahood. California also prohibits write-in candidates in the general election.

Mr. Hunter easily won California’s nonpartisan primary with 48 percent of the vote; the next highest vote-getter, Ammar Campa-Najjar, a Democrat, took only 17 percent.

Despite that, Democrats have long thought they could make a play for Mr. Hunter’s seat, especially if he were indicted. At the very least, the indictment will require Republicans to either spend money to defend the seat.

“The division, chaos and corruption in Washington has gone too far,” Mr. Campa-Najjar said in a statement. “Today’s indictment confirms just how deep this corruption can reach when someone like Duncan Hunter Jr. is in it for himself instead of representing the people.”

A former Obama’s aide, US Hispanic Chamber of Commerce and Department of Labor employee, Campa-Najjar — whose parents are Mexican and Middle Eastern — supports fixing Obamacare and working toward Medicare-for-all, passing a clean DREAM act and is part of a growing cohort of candidates who is not taking any corporate or PAC donations.

“Today’s indictment confirms just how deep this corruption can reach when someone like Duncan Hunter Jr. is in it for himself instead of representing the people,” the Democratic candidate said in a statement light of Hunter’s indictment.

No days off until Election Day! 80 days until the weekend.

November 6: Drain the swamp 🐊
November 7: Hit the beach 🏝
November 8: Back to work 🏛 pic.twitter.com/zBWCLwnTXk

The division, chaos & corruption in DC has gone too far.

Today’s indictment confirms just how deep this corruption can reach when reps like @Rep_Hunter is in it for himself, not people. #TogetherWeCan 🇺🇸 rise above divisive politics & bring real representation to #CA50. pic.twitter.com/BQ3720n55Q

We’re going to fight our hearts out for my new bill to #EndCorruptionNow. But there’s something you can do right now to fight back: chip in to help @ACampaNajjar beat indicted Rep. Duncan Hunter this November. https://t.co/GAFVS08EaO