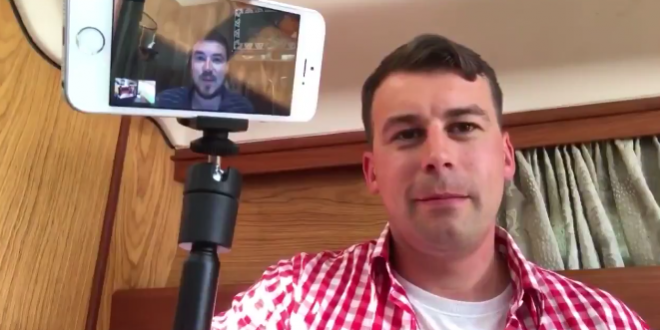 GET OUT OF MY ROOM: Live-Stream By Nazi Organizer Jason Kessler Interrupted By Furious Father [VIDEO]

Jason Kessler, the organizer behind last year’s violent white supremacist rally in Charlottesville, Virginia, was knee-deep into a live-streamed conversation about Jews with neo-Nazi former U.S. Senate candidate Patrick Little when disaster struck: he was interrupted by his angry father. It led them to commiserate about their money woes, a consequence of their hate campaigns.

In the beginning of the video, a clip of which was posted to Twitter, Little is finishing up a thought on Israel as an off-screen voice jumps in. “Hey, you get out of my room,” it said. Kessler excused himself, saying he had a situation. “You’ve got a drunk roommate?” Little asked, bemused. “I’ve got someone who supports, uh, orthodox, Israeli…we’re at a cross hairs on that stuff,” Kessler responded.

Unite the Right 2 organizer, Nazi failure Jason Kessler gets yelled at by his dad for being a Nazi while livestreaming w Nazi loser Patrick Little, who admits he may have to sell the boat he’s broadcasting from at a loss because he needs money. pic.twitter.com/skmlmtdSAE