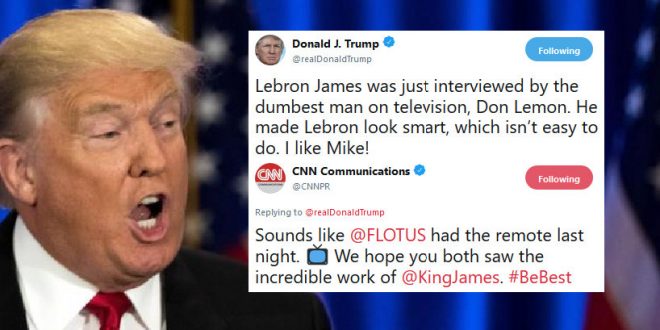 CNN Trolls Trump: Sounds Like Melania Had The Remote

CNN on Saturday mocked President Trump for tweeting about an interview on the network despite his repeated attacks on it for being “fake news.” The network’s communications team responded to Trump’s tweet, suggesting that if Trump was watching CNN, it must have been because first lady Melania Trump was choosing the channel.

Last month a report said that the president lashed out at his aides after seeing his wife’s television tuned to CNN on Air Force One. In response, a spokeswoman for Melania Trump said that the first lady watches “any channel she wants.”

Lebron James was just interviewed by the dumbest man on television, Don Lemon. He made Lebron look smart, which isn’t easy to do. I like Mike!

Sounds like @FLOTUS had the remote last night. 📺 We hope you both saw the incredible work of @KingJames. #BeBesthttps://t.co/3Ok0z9Z6Ro

Previous STUDY: When Robots Beg For Their Lives
Next SPAIN: Fascists Battle Plan To Dig Up Francisco Franco