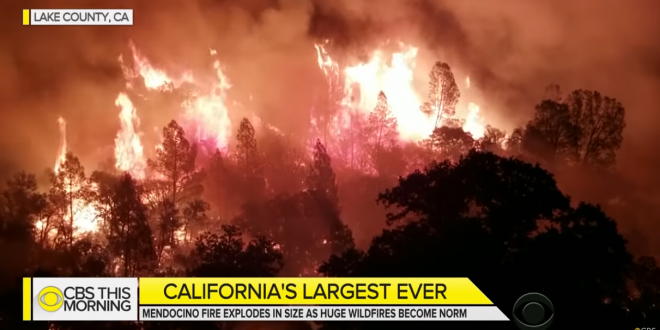 The Mendocino Complex fire is now the largest wildfire in modern California history, scorching more than 283,000 acres and frustrating firefighters as it continues to leap across natural and man-made barriers in Lake County.

The Ranch and River fires, which make up the complex fire, had grown to 283,800 acres as of Monday evening, according to the California Department of Forestry and Fire Protection. The blaze was only 30% contained.

“We broke the record,” said Scott McLean, a deputy chief with Cal Fire. “That’s one of those records you don’t want to see.” The blaze surpassed the Thomas fire, which burned through more than 281,000 acres in Ventura and Santa Barbara counties late last year.