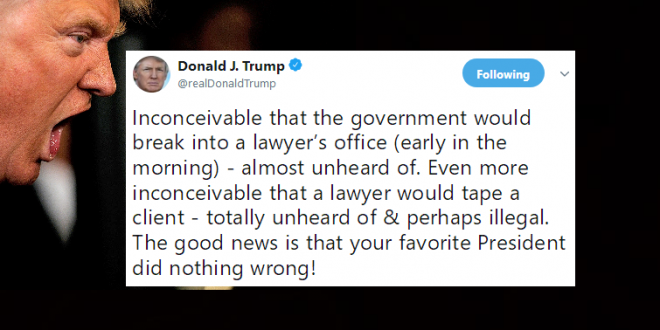 President Trump on Saturday broke his silence about the revelation that his former longtime lawyer and fixer Michael Cohen secretly recorded one of their conversations before the 2016 election dealing with a payment over the story of former Playboy model’s alleged affair with Trump.

Trump’s personal lawyer Rudy Giuliani confirmed to The Post that the recording existed but declined to discuss details and said a payment was never made. He also claimed that nothing in the tape shows that Trump “had any knowledge of it in advance.”

Inconceivable that the government would break into a lawyer’s office (early in the morning) – almost unheard of. Even more inconceivable that a lawyer would tape a client – totally unheard of & perhaps illegal. The good news is that your favorite President did nothing wrong!

Govt doesn’t “break into” anything when it has a legal warrant issued by Federal Judge, and NYS is one party consent state so Cohen’s recording was legal. I’ve never taped a client so one does wonder why Cohen didn’t trust you & felt compelled to do so. We’ll find out soon!

James Comey better hope that there are no “tapes” of our conversations before he starts leaking to the press!