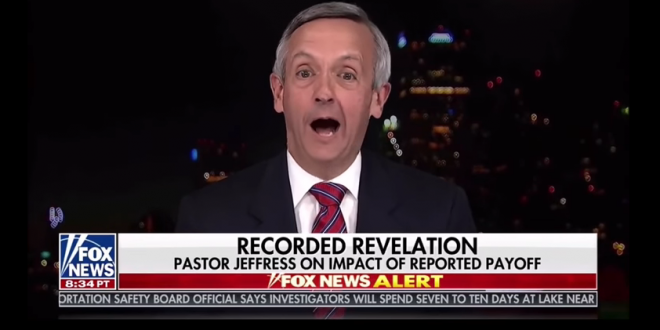 “We’ve been here before. Back in 1980, evangelicals chose to support a twice-married Hollywood actor who was a known womanizer in Hollywood. His name was Ronald Reagan. They chose to support him over Jimmy Carter, with a born-again Baptist Sunday school teacher who had been faithfully married to one woman. The reason we supported President Reagan was not because we supporting womanizing or divorce. We supported his policies.

“And that’s true here, Ed. We are choosing to support his policies. We’re not under any illusion that we were voting for an altar boy when we voted for President Trump. We knew about his past. And by the way, none of us has a perfect past. We voted for him because of his policies.

“Government has a responsibility to maintain order and preserve citizens’ freedom, according to 1 Timothy 2. That’s exactly what President Trump is doing. He’s fulfilling his God-given responsibility in securing our border and keeping our nation safe. He is the most religious liberty-oriented president we’ve ever had.” – Scamvangelical Robert Jeffress, speaking last night on state television.

RELATED: In recent months Jeffress has declared that Trump has the God-given authority to assassinate Kim Jong-Un, that kneeling NFL players would be executed in places like North Korea, and that the police are “ministers of God” sent to “punish evildoers.”