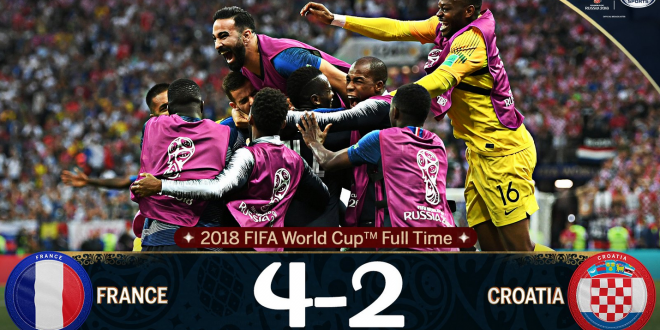 Croatia finally found a deficit it couldn’t overcome. On the 20th anniversary of its only other World Cup win, France snagged a second title. One game after Belgium complained about the French playing “anti-football” by packing it in on defense, the Les Bleus poured in four goals, tied for second-most in a World Cup final, led by its three biggest stars: Antoine Griezmann, Kylian Mbappe and Paul Pogba.

A wild first half ended with Croatia trailing, just as it had in the three games before this one. France’s Antoine Griezmann scored a penalty-kick goal in the 38th minute and also sent in the free kick just outside the box that deflected off Croatia striker Mario Mandzukic’s head and went in for an own goal in the 18th minute. Between those goals, Ivan Persic gave the Croatians a short-lived equalizer.

Pussy Riot has claimed responsibility for the four pitch invaders who disrupted the World Cup final between France and Croatia in Moscow on Sunday. Just after Croatia goalkeeper saved Kylian Mlbappe in the 51st minute, four people emerged from the other end of the field. One made it to the center circle. They were quickly tackled by security, and the match resumed after a delay of about one minute. The balaclava-clad women of Pussy Riot, a Russian punk rock group, rose to global prominence with their daring outdoor performances critical of Russian President Vladimir Putin in 2012 that sent two members to prison for nearly two years.

France win the World Cup! Here is how Paris reacted at the final whistle! 🇫🇷 pic.twitter.com/mLNgHNDYzT

Congratulations to France, who played extraordinary soccer, on winning the 2018 World Cup. Additionally, congratulations to President Putin and Russia for putting on a truly great World Cup Tournament — one of the best ever!

Previous Elon Musk Calls Cave Rescue Hero “Pedo Guy” For Telling Him To “Stick Your Submarine Where It Hurts”
Next CHATTER AWAY: Overnight Open Thread