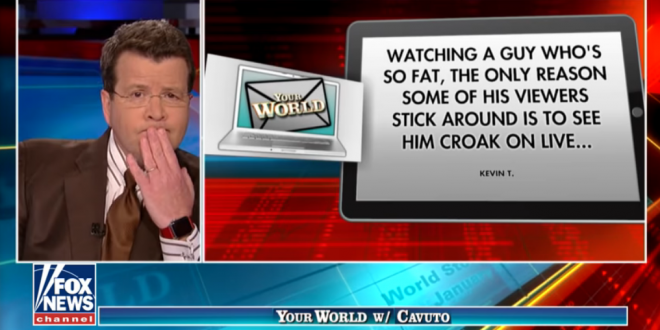 Devoting nearly ten minutes of his show to hate mail Thursday, Fox News host Neil Cavuto clapped back at his critics, who filled his inbox with personal attacks on everything from his appearance to his health.

The messages were sent as Cavuto spent a short time off the air after lashing out at President Donald Trump for his Helsinki press conference, being one of a handful of conservative cable personalities to take aim at his weak posture and doubt of Russian election meddling.

“The chubby chump’s been chucked,” one viewer wrote. “Yippee, no negative Trump bashing from this broadcast fake with the fake hair and the fat neck. Use the time off to atone for your sins and maybe eat a salad.”

As you’ll see, most of the hate mail was about his weight. To his credit, Cavuto is pretty funny about it all.

Previous Pirro Whines To Hannity: Whoopi Treated Me Like A Dog, Literally Spat At Me, Told Me To Get The Fuck Out
Next Angela Merkel: Germany Can No Longer Rely On An American Superpower To Maintain World Order