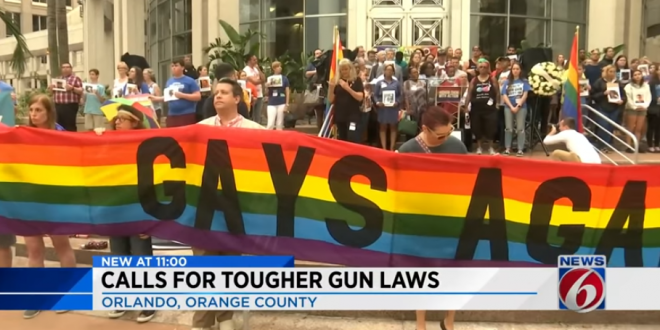 An emotional, rain-soaked rally on the eve of the Pulse anniversary Monday evening was mixed with anguish and raw anger over the lack of progress on gun reform and gay rights in Florida and the sheer number of mass shootings that have happened since.

Pulse survivors were joined on the steps of City Hall by survivors of the Feb. 14 shooting at Marjory Stoneman Douglas High School in Parkland and about 200 rallygoers, several of whom stretched a rainbow ribbon in front of the podium reading “Gays against guns.”

It’s been two years to the day since the Pulse nightclub shooting that claimed 49 lives in Orlando. And for two years, Gov. Rick Scott has faced the same question from many in the state’s LGBTQ community. Why didn’t the governor do more to reach out to LGBTQ citizens after the massacre?

Scott, for the second year in a row, officially proclaimed June 12, “Pulse Remembrance Day.” But some LGBTQ advocates say they want more from the governor. Smith has long criticized Scott for failing to sign an executive order banning discrimination based on sexuality or gender identity in the workplace.

And many have noted the difference in the governor’s response to the Pulse shooting — after which the governor failed to push for any law regulating firearms — and Scott’s legislative push after the Feb. 14 Parkland shooting.

Two years ago on June 12 at 2:02 a.m., Orlando was forever changed. On Tuesday, the city and Pulse nightclub will remember the 49 people who were killed and continue to support the more than 50 others who were shot or injured.

At noon, a bell will toll 49 times at the First United Methodist Church marking the 49 lives taken. Later in the day, a remembrance ceremony and community gathering will happen at the new Pulse memorial beginning at 7 p.m.

A month before the second anniversary of the shooting, the temporary memorial at Pulse opened to the public. It was the first time mourners and visitors had had an official place to leave tokens and write notes at the South Orange Avenue location since the FBI erected a fence around the club hours after the shooting.

June 12 is Orlando United Day – A Day of Love and Kindness. The day is dedicated to honoring the memory of the 49 victims of the Pulse Nightclub shooting, supporting survivors and recognizing the compassion and love displayed by our community. Our #PulseExhibit is free thru 6/16. pic.twitter.com/eGTjGaz62N

Today and every day we remember the 49 lives taken on June 12, 2016.#OrlandoUnited pic.twitter.com/2z6qCjt8E0

We attended a #Pulse rally today as the 2 year anniversary of the shooting nears. We pledge to #HonorThemWithAction and enact common sense gun safety laws that will keep our communities safe. pic.twitter.com/WguAK8ij8R