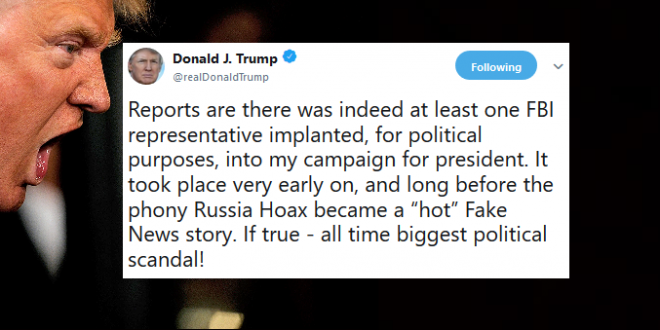 Trump is contradicting his own lawyer again:

Rudy Giuliani, who is representing President Donald Trump in the Russia investigation, said Friday he doesn’t know for sure if the FBI had an informant in the Trump campaign. “Here’s the issue that I really feel strongly about with this informant, if there is one. First of all, I don’t know for sure, nor does the President, if there really was. We’re told that,” the former New York City mayor told CNN’s Chris Cuomo on “New Day.”

The New York Times reported Wednesday that at least one government informant met several times with Trump campaign advisers Carter Page and George Papadopoulos. The suggestion that there was an informant has been seized on by several Republican members of Congress and Trump’s legal team to raise doubts about the legitimacy of special counsel Robert Mueller’s investigation.

Reports are there was indeed at least one FBI representative implanted, for political purposes, into my campaign for president. It took place very early on, and long before the phony Russia Hoax became a “hot” Fake News story. If true – all time biggest political scandal!

Why isn’t disgraced FBI official Andrew McCabe being investigated for the $700,000 Crooked Hillary Democrats in Virginia, led by Clinton best friend Terry M (under FBI investigation that they killed) gave to McCabe’s wife in her run for office? Then dropped case on Clinton!

WaPo reported on May 8 that the DOJ/FBI intervened w/ POTUS directly to prevent Nunes from getting info on this source because they feared he would risk the identity. POTUS agreed. Only after it became about the Mueller probe has he suddenly discovered merit in Nunes request. https://t.co/4wnKmD7T5A

Previous CHILE: All 34 Catholic Bishops Offer Resignation To Pope Francis Over Coverup Of Molestation Scandals
Next Worshiping At “The Church Of Beyonce” [VIDEO]