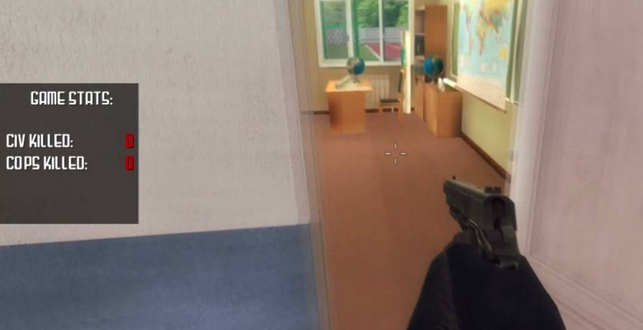 An upcoming computer video game that would allow players to re-create school shootings by stalking school hallways and racking up kills has been condemned as insensitive and inappropriate by the parents of students who were shot to death during the massacre at Marjory Stoneman Douglas High. The game — titled “Active Shooter” and slated for a June 6 release via the digital video-game marketplace Steam — is branded as a “SWAT simulator” that lets players choose between being an active shooter terrorizing a school or the SWAT team responding to the shooting.

Andrew Pollack, the father of 18-year-old Meadow Pollack, who was killed on the third floor of the high school’s 1200 building, echoed Petty’s sentiment. He said that “sick people” were behind the game’s creation and release and that these kind of games would desensitize young people to the tragedy that befell his daughter. “The last thing we need is a simulated training on school shootings,” said Pollack, the founder of the school-safety advocacy group Americans for CLASS. “Video game designers should think of the influence they hold. This really crosses the line.”

The game’s Russian publisher, Acid, claimed in a blog post Thursday that the simulated shooting game doesn’t promote violence and was originally conceived to allow players only to act as responding SWAT team members rather than the role of an active shooter.

“Then I thought about adding more gameplay to it by adding additional roles: of the shooter and the civilian,” Acid posted Thursday. “While I can see people’s anger and why this might be a bad idea for the game, I still feel like this topic should be left alone.”

The company said Active Shooter isn’t even the most violent game available on Steam’s platform, citing games like Hatred, Postal and Carmaggedon, which tasks players with killing others indiscriminately. More than 54,000 people have signed a petition as of Tuesday demanding that the game’s release be shut down.

Previous Study Concludes That Death Toll For Hurricane Maria Is 70 Times Higher Than Trump Administration’s Figure
Next Roseanne Producer Wanda Sykes: I Won’t Be Back