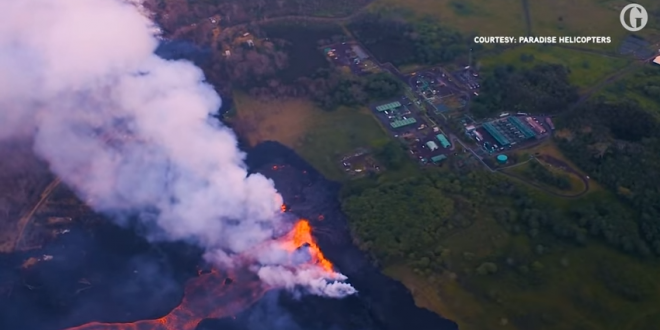 Emergency workers in Hawaii are racing to protect a geothermal power plant near the Kilauea Volcano. Slow-moving molten rock entered the site and is just a few hundred yards from the wells. There is concern lava could trigger the release of deadly hydrogen sulfate gas, reports CBS News’ Mark Strassmann.

Lava continued its steady advance toward the Puna Geothermal Venture Plant before stalling late Monday. The facility is shut down, but the wells there still present a risk if overrun with the molten rock. “It’s not easy to predict where it’s going to go, and when it’s going to get there,” said Tom Travis, of Hawaii Emergency Management.

Flammable liquids have already been removed and the wells have been filled with cold water, but won’t be plugged until today. A worst-case scenario could be catastrophic. “There’s a steam release, many chemicals, but primarily hydrogen sulfate, a very deadly gas,” Travis said.