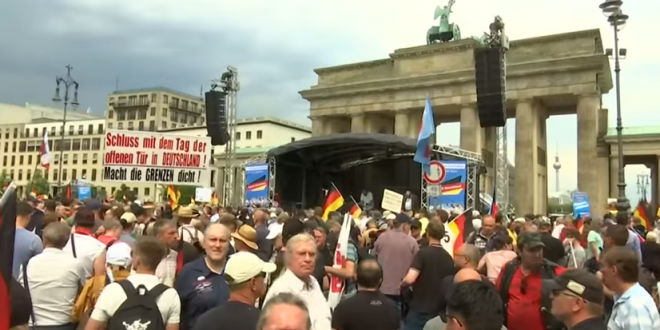 Berlin was treated the surreal spectacle on Sunday afternoon of the Brandenburg Gate once again serving to demarcate two Germanys. On one side, some 5000 supporters of anti-immigration, anti-EU Alternative for Germany party (AfD). They congregated to express their discontent and often outright contempt for the policies of Chancellor Angela Merkel’s government, particularly her welcoming stance toward refugees.

On the other side and in the surrounding Tiergarten park, over 20,000 opponents of the AfD. They turned out to vent their discontent and often outright contempt for what they consider to be a return to the xenophobia and racism of Germany’s dark historical past. In the middle, 2000 police who managed to keep the two sides apart and ensure that the populists were able to hold their rally without a riot

The AfD event opened with German flags, placards such as “No Islam in Germany” and chants of “Merkel must go” outside Berlin’s central train station. The party’s supporters then marched to the landmark Brandenburg Gate. Opponents chanted “Nazis out” from the other side of the monument.

Some of the counter-protesters took to rafts on the Spree river, within sight of the train station. Groups organizing protests against AfD included artists and a coalition of Berlin music clubs hoping to “blow away” the party with loud techno beats.

AfD won 12.6 percent of the vote to enter Germany’s national parliament last year on anti-migrant and anti-establishment sentiment. It is now the largest of four opposition parties after the country’s two biggest parties finally agreed to continue a centrist “grand coalition” under Merkel earlier this year.

Berliners responded with at least 13 registered counter-demonstrations. These included one by the city’s club scene, which put on a techno music party, aiming to “Bass the AfD away” with music blasting from speakers on 20 public address trucks.

“We want to be loud enough to drown out the racist speeches,” an activist named Rosa told RBB public television. The thudding techno beat echoed across the city center on Sunday afternoon. Another group of anti-AfD protesters were on a boat on the Spree river holding up placards saying “You stink!”

As I have previously reported, AfD leader Alice Weidel is a homocon who is raising two children with her partner.