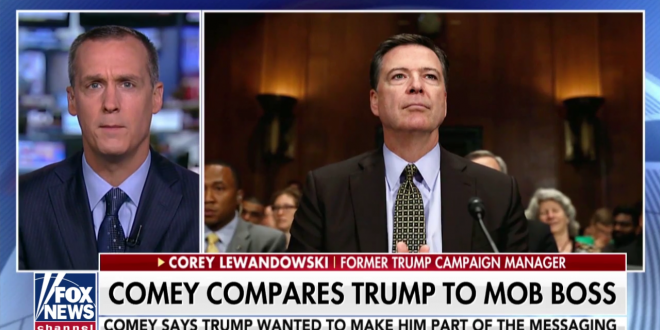 “This is the same Jim Comey who was in charge of the Boston bombing at the time where we had a terrorist attack in Boston. This is man who failed time and time and time again, when he was the head of the FBI, to protect American citizens and now he wants to say that the president of the United States, a duly-elected president, is a mob boss? Look, Jim Comey has no credibility and he lost his credibility when lied under oath before Congress.” – Corey Lewandowski, speaking today on Fox News.

The Boston Marathon bombing took place on April 15th, 2013, at which time Comey was a private citizen serving on the board of directors for HSBC Holdings. He was appointed FBI director by President Obama in September 2013.

Five years and a day after the bombing and @CLewandowski_ is on TV misleading Americans and exploiting a tragedy. I’m sure I speak for many Bostonians today when I say Lewandowski needs to shut his ignorant mouth. https://t.co/DjeWmmrcQA

For his next act of buffoonery, Corey Lewandowski will blame President Barack Obama for not naming James Comey FBI Director sooner. https://t.co/ByQZRauCRc