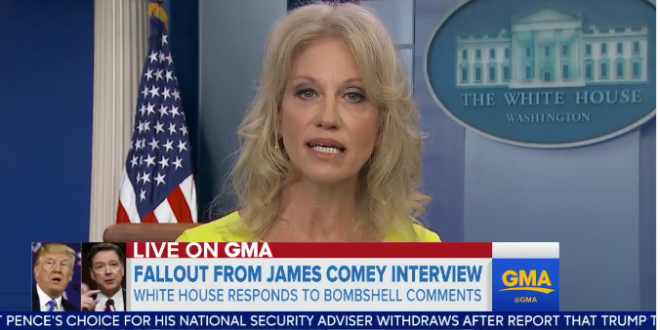 Conway Gets Called Out For Lying About Comey

Kellyanne Conway appeared on Good Morning America Monday, and took a grilling from George Stephanopoulos over her objections to James Comey’s 20/20 interview. Conway started off by trashing the former FBI director, who was fired by Trump last year, for discussing the size of the president’s hands and the length of his tie. “That’s really gutter,” Conway lamented.

Conway went on to allege that Comey “admitted” in a Senate testimony that Trump did not ask him to drop the investigation into former national security adviser Michael Flynn, but Stephanopoulos interjected.

“Kellyanne, I have to stop you there, because that’s not correct either,” Stephanopoulos said, pointing out Comey said no one at the Justice Department asked him to drop the investigation. “He was not asked about the president,” the ABC News anchor said, explaining that Comey has consistently maintained he felt Trump was trying to direct him to end the investigation.

FULL INTERVIEW: “I spoke to the President before the interview…” Counselor to the President Kellyanne Conway one-on-one with @GStephanopoulos: https://t.co/hJAiOh1z0C pic.twitter.com/kFt1jNCwB0

Previous Comey: Russians Might Have Dirt On Trump [VIDEO]
Next Pence Security Advisor Withdraws Because Trump Was Furious About His “Never Trump” Role During Campaign