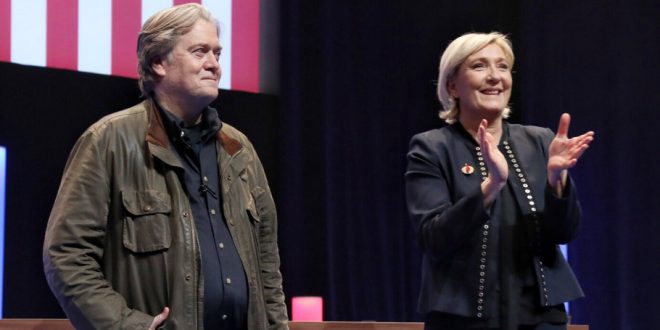 Both have suffered political falls and on Saturday in Lille, France, Steve Bannon, the onetime chief White House strategist, and Marine Le Pen, who lost the French presidency to Emmanuel Macron in May, sought to prop up each other with a shared anti-establishment stance.

Bannon, on a European tour that includes stops in Germany and Italy, addressed a party congress of the far-right National Front, a group that espouses a protectionist and populist agenda. “Let them call you racists. Let them call you xenophobes. Let them call you nativists. Wear it as a badge of honor,” Bannon told the crowd to applause.

In a halting, yet stirring, speech Saturday — paused to allow an interpreter to translate his English into French — Bannon said he came to Europe not to teach but to learn. “And what I’ve learned is you are part of a worldwide movement that is bigger than France, bigger than Italy, bigger than Hungary, bigger than all of it,” he said, evoking Europe’s rise of right-wing parties.