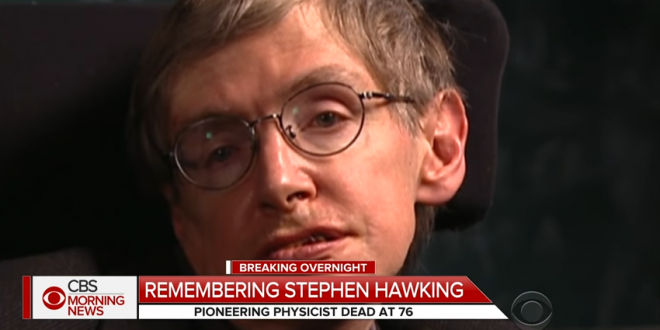 Stephen Hawking – who died aged 76 – battled motor neurone disease to become one of the most respected and best-known scientists of his age. A man of great humour, he became a popular ambassador for science and was always careful to ensure that the general public had ready access to his work.

His book A Brief History of Time became an unlikely best-seller although it is unclear how many people actually managed to get to the end of it. He appeared in a number of popular TV shows and lent his synthesised voice to various recordings.

Hawking discovered the phenomenon which became known as Hawking radiation, where black holes leak energy and fade to nothing. He was renowned for his extraordinary capacity to visualise scientific solutions without calculation or experiment. But it was perhaps his “theory of everything”, suggesting that the universe evolves according to well-defined laws, that attracted most attention.

It’s only been a few hours and Stephen Hawking already mathematically proved, to My face, that I don’t exist.