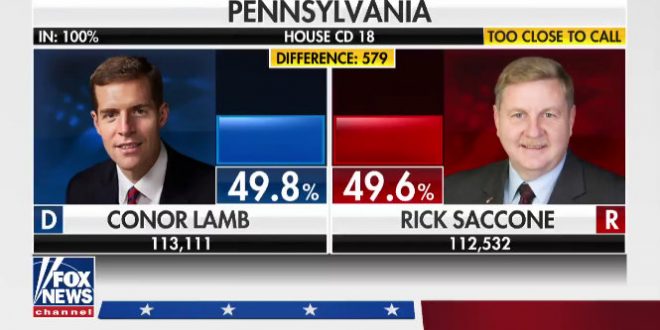 Democrat Conor Lamb is the apparent winner over Republican Rick Saccone in Tuesday’s special election in Pennsylvania’s 18th Congressional District, according to an NBC News projection.

With 99 percent of the votes counted, Lamb was leading by 641 votes in a district long held by the GOP and one that President Donald Trump — who backed Saccone — carried by 20 points in 2016. Lamb declared victory early Wednesday morning. Saccone has not conceded and his campaign is in touch with legal counsel.

Shortly before 1:00 a.m., Lamb was introduced as “congressman-elect” at his election night party. “It took a little longer than we thought, but we did it!” Lamb told cheering supporters.

Democrat Conor Lamb on Trump calling him ‘Lamb the sham’: “There was a lot of foolishness in this election and a lot of really cartoonish campaigning… By the time of the President’s visit last weekend, people were kind of tired of that approach.” https://t.co/8gHkZfx18T pic.twitter.com/vlwiMBdAPP