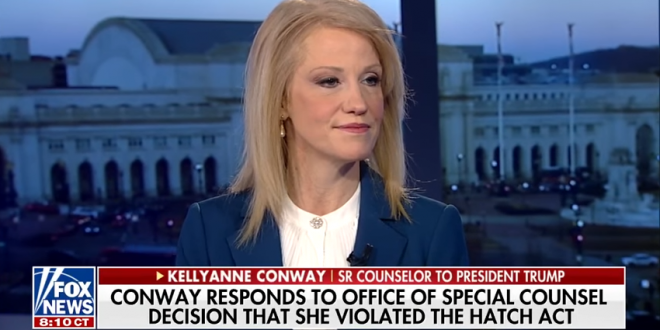 Kellyanne Conway said Thursday she had spoken to President Donald Trump about a watchdog report that found her past remarks on the Alabama special election to be in violation of federal law, but the counselor to the president declined to say whether she would face disciplinary action over the ethics breach. “The president and I have spoken about this,” Conway said when asked about the report on Fox News. “I have not made a comment on this at all and I won’t today.”

Conway added that she “won’t reveal” the details of “private conversations” between herself and the president. Pressed on whether that meant the White House would not impose disciplinary actions against her, Conway again dodged. “I didn’t say that,” she said. “I also recognize every day, maybe I’m still there and will continue to be, I’m not there to read about myself. I’m not there to talk about me and I’m there to the service of the country that I love.”