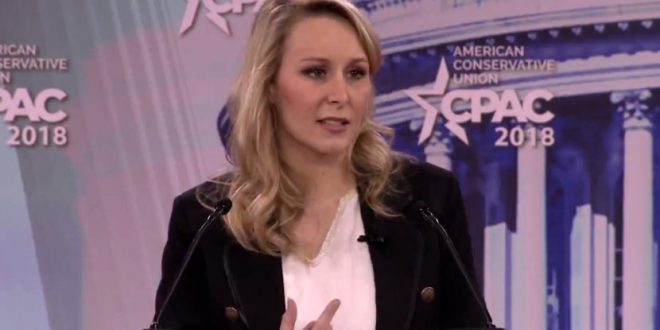 Speaking today at CPAC, French fascist Marion Le Pen ranted against LGBT rights, saying, “We do not want this atomized world of individuals without gender, without mother, without father, without nation.”

Le Pen went on to compare Brexit and the French anti-gay hate group La Manif Pour Tous with the election of Trump, citing all three as examples of the global rise of the right.

Britain First, as you may know, is the extremist group whose name was shouted by the assassin of British MP Jo Cox as he stabbed her to death in June 2016.

Many hope Trump’s white nationalism is a passing GOP anomaly, but when @CPAC invites Marion Le Pen – a leader of Europe’s pro-Russia, anti-Semitic, nationalist movement – to speak after Pence, it’s a sign that Trumpism is the party’s new strategic direction, not a 24-hour flu.

@mschlapp – I like you. I like where you told me CPAC was headed. Last year we spoke about MILO, you did the right thing. Now a NATIONAL SOCIALIST – Le Pen?!. Please come on radio today and help us understand what CPAC is thinking. European conservatives r VERY different.