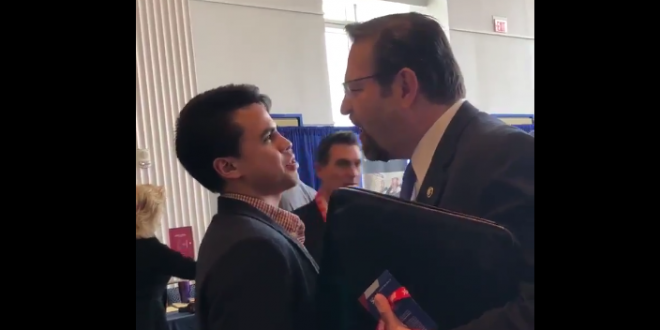 In a video posted this morning to Twitter, former White House advisor and alleged Nazi Sebastian Gorka can be seen having a heated exchange with Mediaite reporter Caleb Ecarma.

Their conversation can’t be fully heard, but at one point Gorka seems to mockingly threaten to strike Ecarma’s face. Their encounter ends with Gorka shoving Ecarma’s shoulder.

As it turns out the two have a history going back to at least last November, when Ecarma posted a Mediatite item titled “Seb Gorka Just Challenged Me to a Fight Over Email and I Accepted.” An excerpt:

It was around 11 p.m. and I had just lost an absurd amount of money betting on the Milwaukee Bucks, and that’s when my phone pinged. It was Gorka. “So where do you want to meet,” he asked — as any normal, gray-haired 47-year-old ex-White House adviser would after having his masculinity challenged by a 20-something college bro online. While he didn’t use the exact word “fight,” in internet-hardo language, I view “where do you want to meet” as equivalent to “let’s take it outside.” And, man, I was ready to take this off the timeline and onto K Street.

No fight ever happened, but hit the link for the rest.

HOLY SHIT. Just now at CPAC, @SebGorka just raised his hand and threatened to hit @Mediaite reporter @calebecarma, then got in his face, told him to fuck off and shoved him.pic.twitter.com/ElAfIKkDPY

Pleeeeeease press charges for putting hands on you. The press shouldn’t have to deal with physical altercations.

I’m just worried @calebecarma is going to need to decontamination shower after being exposed to Seb Gorka’s cloud of Drakkar Noir. https://t.co/dd1qs7Lksj

Seb Gorka just got in my face, told me to “fuck off” and shoved me — guess he’s still not my biggest fan https://t.co/VLm0fdceLN