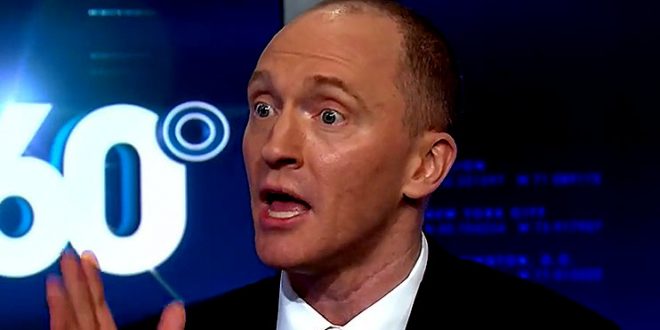 Former Trump campaign adviser Carter Page bragged that he was an adviser to the Kremlin in a letter obtained by TIME that raises new questions about the extent of Page’s contacts with the Russian government over the years.

The letter, dated Aug. 25, 2013, was sent by Page to an academic press during a dispute over edits to an unpublished manuscript he had submitted for publication, according to an editor who worked with Page.

“Over the past half year, I have had the privilege to serve as an informal advisor to the staff of the Kremlin in preparation for their Presidency of the G-20 Summit next month, where energy issues will be a prominent point on the agenda,” the letter reads.

Page is at the center of a controversial memo from Republican Congressman Devin Nunes, released this week. The Nunes memo claims that in Oct. 2016 the FBI improperly received court permission to spy on Page, whom Trump had named as an adviser to his campaign in March 2016.

“The four page memo released Friday reports the disturbing fact about how the FBI and FISA appear to have been used to influence the 2016 election and its aftermath….The FBI failed to inform the FISA court that the Clinton campaign had funded the dossier….the FBI became….

…a tool of anti-Trump political actors. This is unacceptable in a democracy and ought to alarm anyone who wants the FBI to be a nonpartisan enforcer of the law….The FBI wasn’t straight with Congress, as it hid most of these facts from investigators.” Wall Street Journal